Oh, Carrie. Why are our dreams so real?

Usually when it comes to travel, I have it planned via months of endlessly Pinning and trawling through guide book after guide book.  But given the true spontaneity of my trip to New York last week, I left for the airport with a case full of mix-matched clothes, a notepad full of work memos and a wallet of pounds not dollars. I figured I’d figure out the rest when I arrived.

As I left for the airport, I remember calling my Mum and exclaiming how unorganised I was – and she just replied:
‘Think like Carrie’.
And that was it, a reference to my youth. Carrie Bradshaw was my absolute hero in my teens. There is no denying I was absolutely obsessed with Sex and the City. It was all that played on repeat on my television set... 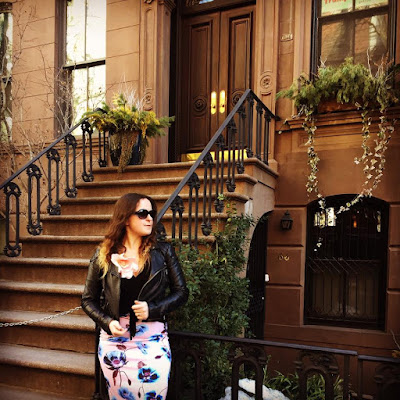 So, Carrie’s apartment was a life-long must see. Now, true to location Carrie’s apartment is located on 66 Perry Street. I’ve got to admit, as soon as we were nearing the Grenwhich neighbourhood I felt an overwhelming sense of familiarity. I couldn’t help but gaze around at the locals, drinking coffee, going about their normal days.

It turns out after 19 years since the first episode of SATC broadcast it’s not just me who still fangirls over Carrie Bradshaw. The true giveaway came when I spotted a group of girls outside a doorway. Definitely not just me. The fashionista in me couldn’t resist a photo a la Carrie – just for those seconds breathing in the NY air, wearing an over-sized corsage, pink skirt and gazing into my own fairy-tale...

A doorway might not seem a big deal, the actual set was studio based … but the fact Sarah Jessica Parker had stood there, and that doorway had been featured in SO many scenes was enough to make my heart warm.

Now, basing your entire vision of a city around a television program may seem unfair. But, standing on the steps of New York Public Library a few days earlier, where Carrie never got married, instead jilted by Big, felt real. I remember thinking GOSH, what a place to get married. If, only... 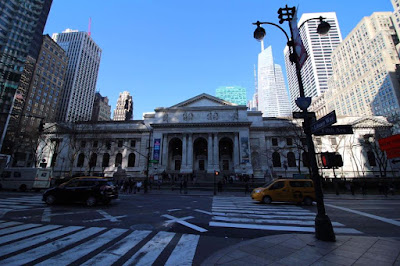 Travel makes you think, not only about your own future, but your past. It lets you process all your dreams at once...
My dream, for as long as I can remember has been to write.

A couple of weeks ago I found myself in a situation at work, which transpired into me declaring I no longer wanted to ‘write’ – now let’s face it, that was a barefaced lie – said in the heat of the moment. And, I think my boss saw the lie written all over my face.

As each day passed in New York, I figured the truth was the same truth it always has been, right from my first journal entry. I want to write.

Surely if there was any place better to realise a real dream. It must be New York? Right.
♥