Blythe has always been one of my favourites since being a teenager, I’ve been a fan of hers for years, and always admired her cult following. A Blythe doll has always been on my ultimate dream list - though hunting one down for a reasonable price is one that will save for a later date. 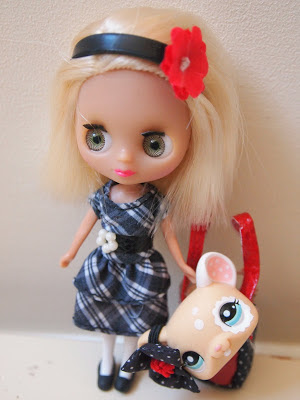 When I was at the charity shop I volunteer at a few weeks back, I was given the task of sorting a pile of donations which had just been dropped off at the shop. This particular lot was all toys, which is quite rare - as you can imagine I was quite simply enthralled, what’s better than being instantly transported back to childhood. The thing I found most peculiar was the fact most of the toys were still boxed and hardly used, I felt a little sad knowing these toys had gone unloved, but also happy knowing they would go to a good home via the shop. It’s times like this you realise just how generous people are.

In my sorting I came across this beautiful doll, I knew almost instantly it was Blythe, but was aware it wasn’t quite the real thing. It was a miniature version, part of a collaboration with the Littlest Pet Shop a few years ago. I was sold right from the start and knew she just had to be mine! I asked whether I could buy her at the end of my shift, because quite simply I was besotted.

She came in her original box and with all of her accessories - I paid one pound for her, which of course is a bargain, for the joy that she has brought me!