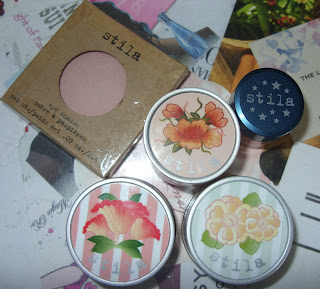 Stila is one of those brands, which I’ve always known about, but never actually owned anything. Their products have always intrigued me, mainly because of their use of pretty florals on there packaging designs.

Hearing TJHughes had had a delivery of Stila products, I got there as fast as possible, rushed for time and quite intimidated by the way the products had literally just been dumped all on a shelf, my mind just went into meltdown, I didn’t know what I wanted to buy, I walked out without a single thing.

It had been on my mind ever since that I did want something, even if only the one product, it was a brand I was willing to give a try. So over the weekend I managed to get back to the Sheffield branch, and surprise surprise the somewhat messy and chaotic display looked like it had not been touched at all. This makes me wonder whether eventually they will lower the prices down to point were they are giving the stuff away, which is more than likely going to happen, and if so I will be there.

So on my second visit I was more determined to sift through the baskets full of disorganised Stila. I literally was crouched on my knee’s going through every single product, which was not the easiest task, as the Stila outer cardboard packaging is all brown and therefore is quite difficult to identify colours/shades etc. 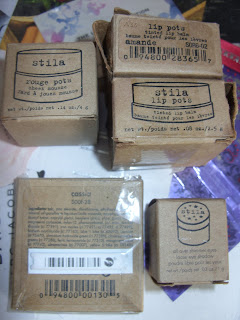 Also TJHughes had decided to cello taped the boxes shut and place a sign saying please do not open, but I found this impossible to obey as I found a lot of the products had actually been put into the wrong boxes! There was a basket full of supposed testers but swimming in leaked lip-gloss and shattered powder was not my idea of fun.

No kidding, I was there going through the products for at least half an hour, no one approached me at all, so I did literally rip some of the packages open, it was the only way to get anywhere.

Even though all the hassle that I have just rambled on about, I am more than happy with what I got :)

The tinted lip balm pots are my fave; I love everything about them and they are so easy to use. The rouge pot was a gamble but I have been wanting to try out a non-powder blush for a while now. The eye shadow was a bit of a daft purchase seems I don’t own a Stila palette these are designed for and nor do TJHughes sell them, but at £3.00 I couldn’t resist an opportunity to try one out, and it’s a perfect neutral shade. The tiny pot is similar to a pigment; I bought this specifically to wear on my birthday, it will look great fingers crossed!