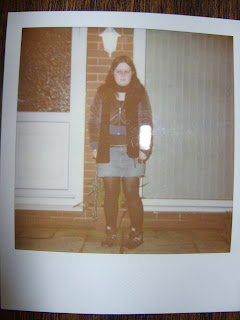 So somewhere in-between sorting some old boxes from the garage out, I shockingly found an old Polaroid photograph of myself. It’s strange I didn’t even remember the photo existed until it was right there in front of me. I’m not the biggest fan of photos at the best of time, but this really gave me one of those shivers down the spine feelings.

Since this afternoon it’s been on my mind, the picture just represents so much, and as much as I wanted to rip it up and chuck it out with the other rubbish, the more I looked at it the more I began thinking. This photograph was taken when I was fifteen; I was on my way to a concert at my school. It wasn’t such a bad night, but I remember wishing I was dancing with the cool people (as opposed to sitting at the back of the hall, like a lonely sole)

Fashion scares me, I admit that. I’m one of them people who can’t concentrate properly if I’m wearing something crap or in other words, I feel fat/uncomfortable in. Which as it happens is 90% of the time.

When I look at the clothes I’m wearing on this photo, I think 3 things.
1) So that’s when the scarf thing started
2) Why is that jacket still hung in my wardrobe
3) I look a god awful mess

5years on, I would like to say I don’t dress like this, but who knows.
Appearances and self-confidence can be shattering, especially when you’re younger. I think the only way to be confident with appearance, is to be happy with your body the way it is.

No matter what anyone says, if someone were to say I looked nice, I would still think the opposite.
I guess it’s something that maybe will never go away complelty, but I think there’s so many girls out there at some point in there life’s, that go through the not fitting in stage and low self confidence.