A girl and her magazines… 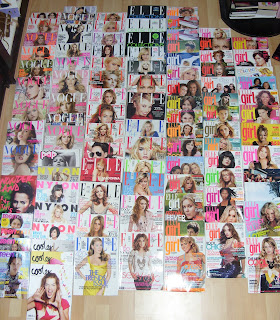 I don’t know how this happened, but I have somewhat overindulged in magazines, it wasn’t until the other day I truly realised the extent of this, 98 magazines under my bed. They had been shoved away mounting up, doing nothing. I think like when it suddenly hit Carrie she had spent $40,000 not $4000 on Manolo Blahniks, it suddenly hit me that I had too many magazines. I really don’t want to do the maths.

So my weekend has consisted of sorting this out once and for all. I started with the Vogues, then the Elle’s. I don’t know why, but I’ve always preferred Elle over Vogue, something about Vogue bugs me, where as Elle is more tailored to what I like to see/read. If I was carefree I would have just chucked them outright, but I opted for sitting on my bedroom floor and dissecting them, checking for articles and inspiration. I’ve found a few interesting bits and pieces, but it’s quite shocking that 80% of each magazine was irrelevant.

I also find it shocking that in some ways the 2005 issues were just as contemporary as the 2009 ones. I guess fashion is just one big circle, where things come and go, in and out and back again.

I haven’t got rid of the Elle Girls; I think I have an emotional attachment to these magazines. Without sounding silly, this magazine CHANGED MY LIFE. Nothing will ever come close to it, it filled my life with inspiration and I spent hours of time reading it. I just simply loved it. I’m going to box these up and put them in the top cupboard :) I did get rid of the copies I had twice though (don’t ask)

So the plan now. DON’T BUY ANYMORE MAGAZINES. Would be a start, but I already bought 2 last week and I will probably buy another this week. I guess it’s just in my nature, I love magazines. The key is to stay on top of them, once I’ve read them they can go, anything I need I can rip out and keep.

P.S I kept the covers :) I’m going to file them in a pretty little folder and maybe in a couple of decade’s time they’ll be kind of iconic.