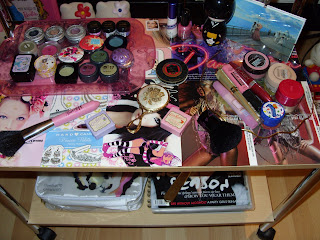 So today I decided to sort my makeup out, once and for all, out with the old in with the new kind of thing. Over the last couple of weeks I’ve spent time with a close friend, who has made me seen makeup in a completely different light. I think it has been more than valuable, and I can’t believe how little I actually knew about makeup before this, not saying that I know tons now, but I do have a complete different opinion on makeup than before.

Excuses are usually just things people say when they don’t have a reason for something and I guess my excuse for my makeup ignorance is somewhere between being 16 and covered in the stuff. I did the whole borderline gothic, then later morphing into that dreaded emo. So when I first started using makeup, it was all pretty dark, I remember piling on the blackest of black eyeliner, it was all about the eyeliner (or so I thought).

So growing up, and growing out of trends, I started toning down the studded belts and My Little Pony handbags; I also stopped with the makeup. But instead of discovering a whole new arisen of colours, I practically wiped makeup out of my life. I wore a pathetic excuse for a powder, and literally one specific brown eye shadow. That is about the dullest as makeup gets.

I am no way near the makeup artist, or infact that skilled in applying my makeup. Still working on that certain eye problem… So back to today, I sorted a lot of stuff out and somehow managed to make a boring trolley I was on the verge of throwing out, into a useful place to store my makeup.

If you know me, you will know I’m an absolute kitsch junkie, so no surprises I drafted in a pink plastic tray to display my eye shadows on, and a Japanese doll to just stand amongst the makeup, not forgetting them Cath Kidston bath melts (just for decoration).