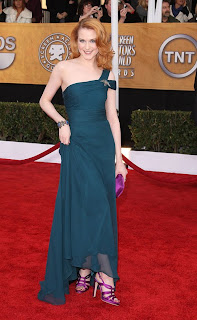 Evan Rachel Wood at the The 15th Annual Screen Actors Guild Awards, looked stunning. I think the one-shoulder dress by Monique Lhuillier looks perfect, it's formal and ladylike, and simply gorgous on her. The accessories add a quirky touch and keep it looking young.

I think I like this girl you know. I feel sometimes she gets a lot of negative stuff said about her, when really half of the people who slate her, probably don't actually know her personally, so are completly making judgements that are based on what the press tells us.

I think the whole Manson affair was maybe a little odd for a while, but you should respect her private life. I love Dita Von Teese, but this shouldn't make me not like Evan. They are two completly different people, and I think Evan deserves a chance, especially now, as she is no longer even with Manson.

Anyhow, to the important stuff. Fashion.